They may be gods, but you are done being faithful.

It's time to burn their kingdom down.

Sing songs with the words they could not take from you. Raise the banner woven from the flags you stole back from them. Arm yourself with the swords you forged from their discarded bones.

This game was written for the Attack and Dethrone God Jam. It is a GM-less game, meant for 2-4+ players, and is played with a deck of playing cards and some six-sided dice.

While the illustrated version of the game is priced at $7, the plain text version of game is available for whatever price you wish to pay for it, and I encourage you to donating whatever money you would have spent on this game to organisations supporting marginalised people, and working for a more just and equitable future. Here's a list to get you started, but don't stop there.

If you play the game, please let me know what you think of it, either in the comments here, or on Twitter.

My friend and I played this yesterday evening and we had a blast! For the record, we played this online via Discord and playingcards.io and had a music bot set up to play ambient music. This is the playlist I found on Spotify and had playing, in case anyone's interested.

In hindsight I'm not sure we played it entirely correctly, but I think we got the gist of it in the end. We spent more time than we really should have attempting to set up the playing cards, so if it's your first time using playing cards online I'd suggest familiarising yourself with the programme you're using (instead of fumbling around with it for half an hour LMAO)

It was a fun exercise in world-building and character building for sure, and, even though it's probably not the intention of the game, a great way to create a TTRPG party with meaningful character dynamics in a few hours.

I think having a diagram of what your table should look like after you have your cards set up might be helpful, but it might also just be the case that I was kind of tired and didn't comprehend the instructions as well as I should have :P

Like the other comment says it's entirely playable alone but I enjoyed having someone to bounce ideas off of (yes there was mutual oblivious pining in our characters because why not). Either way, the two of us are definitely looking forward to playing this again!

I just finished a solo game of this and I had a lot of fun. :)

It’s very forgiving if you roll low, but it’s easily adjustable if you want something more high risk. I personally didn’t change anything because I found that aspect to be a breath of fresh air.

I recommend it whether you’re alone or with a group. 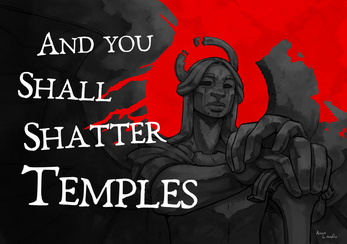 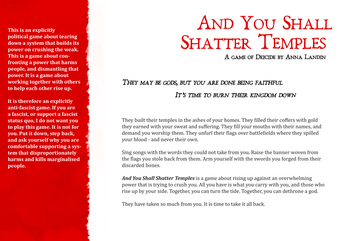 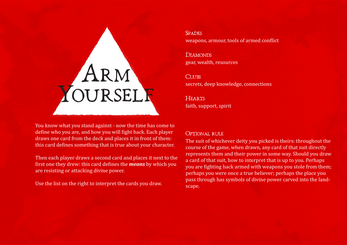