The only way out is through. Can you make it through the Dark?

You were exiled from the City. Whatever you once were, whatever life you lived before, it has been cut off from you as the gates slam shut behind you. Right now, you are but one of the lost in these catacombs, desperately searching for that one, flickering light of hope:

Somewhere down here in the dark, they say there is a way out.

You are not the first nor the last to be exiled, and you are not alone down here. You can work together with your fellow exiles, or you can conspire against them, but know this - it is a long, hard road to walk alone.

A dungeon-crawling game for for 3-6 players, in which those exiled for their crimes must make it through a dark and buried labyrinth to the fabled Exile's Gate, beyond which freedom lies. It is played with a 12-sided die and a few pieces of paper.

Version 1.2.1 (released February 2020, along with the supplement Shades and Echoes) has been playtested and edited to reflect player feedback - but all feedback is welcome, and the game may receive further updates.

The Dark Below was written for the End Jam, hosted by Dylan Grinder. You are encouraged to use safety tools when playing it. You can find the Safety Tools Toolkit here, courtesy of KiennaS and Lauren.

Shades and Echoes is a supplement intended for Guides (the equivalent to Game Masters), and explands a little on the advice given in the basic version of the game, as well as giving a list of possible locations, threats and residents of the Dark to include in your game.

In order to download this game you must purchase it at or above the minimum price of $10 USD. You will get access to the following files:

Support this game at or above a special price point to receive something exclusive.

Loved playing this, though I've only got one game in, currently working on a review for our group liveplay YouTube channel (dunno if it's allowed to link here, might try when we manage). Also as a DM I've loved building the dark (ended up stealing solipsistgames method and making my own deck out of modified magic cards). I'm looking forward to run it a second time (possibly next month, possibly recorded for YouTube) and to use a lot of the stuff build in the dark for my other games (some of the creatures from Shades are beautiful nightmare fuel). Also thank you for making me aware of The Script Change RPG Toolbox, we used Lines and Veils up to this point and we are finding this second tool super useful as well

It took me a little longer than expected to finish my game, due partly to a cancelled session, and partly to the exiles believing a wandering soul that the Gate of Exiles (which they found at the start of the second session) was not actually the gate, but all three managed to escape in the end.

I was wondering if anyone would be interested in the method I used to create the Dark, which used a semi-randomised deck of encounters and denizens to create the Dark as we went along. That meant that I, as GM, didn't know where the Gate was any more than the players did, something which I felt really suited the game.

I can go into more detail if anyone is interested, or even try and write up the method as a PDF.

Will be running this on Monday, and I have two questions (which i should have asked much sooner).

How many tests do you make per challenge? They examples in Shades & Echoes make it sound like one test by one player per encounter, but I'm also suspecting that it's more like a trad RPG, with as many tests as seem necessary to overcome an encounter.

You don't track health, but what happens if the natural consequence of a failed roll is death? Like, you try to leap a bottomless chasm and fail, are you dead? Hanging from the edge (in which case, you can't die?), or something else? I was thinking of having the consequence of a "certain death" roll be a lost match + you didn't achieve anything — so in the chasm case you are still on the side you started on.

During playtesting, both when I have run this and when others have run it for me, we have usually limited the number of attempts to overcome a challenge to one or two. You are of course free to do as many tests as you wish, but I find that letting the consequences of failure change the circumstances and maybe divert the players' path, or require them to try a radically different solution, ends up being more interesting.

If a natural consequence of a failed roll is death, you can let that death ride, if your player is okay with it - but you are also encouraged to think up alternate solutions. Maybe your player drops into the chasm and gets separated from the rest of the group - but they end up falling into a strange pocket dimension of darkness, or maybe they land on something soft and find out they're in a labyrinth of narrow caves, or maybe they blink and find themselves somewhere completely unexpected.

The Dark Below is meant to be a twisty, surreal fantasy of a journey, which means that the normal, mundane consequences of physics don't always need to apply - unless you want them to.

Best of luck with your game!

Thank you very much for the feedback!

So, let's assume your party of 4 Exiles come to the bottomless pit and decide to jump over. You say that's a 6+ They choose to try and make a ladder — you wouldn't roll for that, you'd just maybe adjust the difficulty to 5+

Then, do you make a single roll for all 4 Exiles, or do you have each Exile roll for themselves?

They're making one ladder and climbing down it? *I* would probably say that's a single roll, mostly in the interest of keeping things moving. But if you want more tension and peril for your players, then individual rolls are fine too!

It all depends a bit on what sort of mood and atmosphere you're going for in your session.

The first session went well. Andre the Gambler (who learned what should not be known) has a broken arm and discloated shoulder from falling out of an iron tree while a flock of wire and bone birds attacked him, Pat the Gondolier (who crossed the river the wrong way) had his shadow devoured by shadow hounds and is now tissue thin, and Donna the Grave Robber (who stole the Queen's head) has been left behind on the platform as the last train rolls away into the darkness.

Next week they hope to find the One-Eyed Captain's Levaiathan and recover the Captain's eye in return for a clue to the Exile's Gate.

I'll post something about the deck-based generation system I'm using when it's all done.

The Dark Below is a moody, atmospheric trpg about underdark-crawling. It has a feeling similar to Ultima Underworld,  and the mechanics have just enough crunch to feel grounded, but not so much that it interrupts the close, ominous, suspenseful atmosphere.

Character creation is simple and characters fit on index cards, making this a good portable game (something to play while camping, or if you're not the driver on a road trip.) Characters also have a neat mechanic called matches, which lets them choose to auto-succeed challenges before rolling, if they're willing to spend a very precious currency.

A lot of the mechanics of Dark Below revert back to the GM making a judgement call (such as setting the TN for a roll, deciding the consequences for a failure, adjudicating when certain consequences apply,) so you may want someone who is already comfortable GMing to run this. Still, it's *not* an inaccessible game, and it wouldn't be a bad engine to learn on, either.

Setting-wise, Dark Below is extremely well-written and evocative. If the mechanics weren't also really simple and good, I'd be tempted to bill the writing as its true strength, but it really just shines all around. There's a sense of half-hidden things to the setting that feels like it belongs in a Thief game, and Dark Below also manages to hit a feeling of being otherworldly that a lot of gothic settings try and fail to accomplish.

One thing the core game could really benefit from is a dungeon-generator. Even some quick rules about making sure you keep at least one unexplored passage on the map so that the players have somewhere to go if their current direction doesn't pan out would be helpful. As is, having something like donjon on hand might be useful if you get stuck.

The Dark Below also comes bundled with Shades And Echoes, which fleshes out more of the setting and provides much more of a toolkit to help with modding the game to your liking. It doesn't quite give you rules for auto-generating a map, but it gives you several modes you can set your dungeon to, as well as a number of rooms, room hazards, and even npcs.

Overall, I think Dark Below is both an excellent game in its own right, and potentially one of the best pick-up-and-play options that I've seen for running dungeons from other game systems. I would strongly recommend it to anyone who likes dungeon-crawling, heavy atmosphere, tension, and just enough crunch to feel invested in the setting.

-Beginning your Journey, "do you wish to scared" to be scared, also missing caps on "your"

Thank you so much for these very kind words, Kumada! I am so very glad you enjoyed The Dark Below. This is a fantastic review!

Regarding dungeon generation - I do have notes on adding some advice and rules for generating dungeon-challenges that might get added to the core rules in a future release, though I have yet to decide how expansive I want them to be. The rules for the physical layout of the dungeon are kept light on purpose, to allow for adjustments on the fly, and to allow character-players to draw the map as they discover it - and to emphasise the strange, nightmarish quality of the environment. But I realise that there might need to be some more support for dungeon-creation from the GM's side.

And re: your minor issues

- thanks for picking up on that missed word! I'll fix that for the next revision

I'll have to consider re-phrasing some of the rules to repeat the fact that you're rolling a d12, just for the sake of clarity.

I completely missed the line about the d12. I re-read that section a couple of times, and must have missed it on each pass.

I think bolding the line would help, but unless other people are running into the same issue, it's totally fair to just write this one off as a user error.

Very good for a spooky dungeon-crawl and you should play it if you like those things!

The setting is evocative and scenarios quickly develop as you read through the material.

10/10, would watch as players daisy-chain their way through hell basements again. 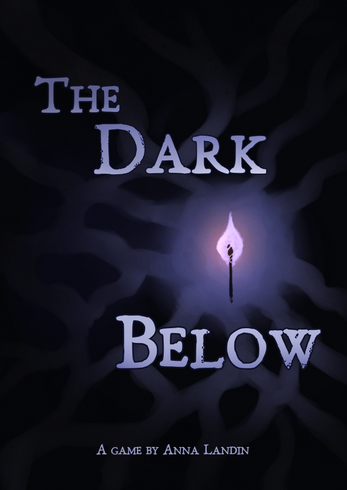 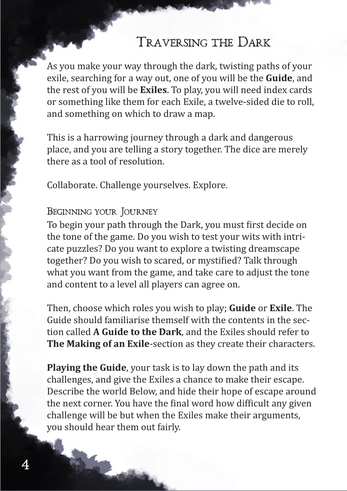 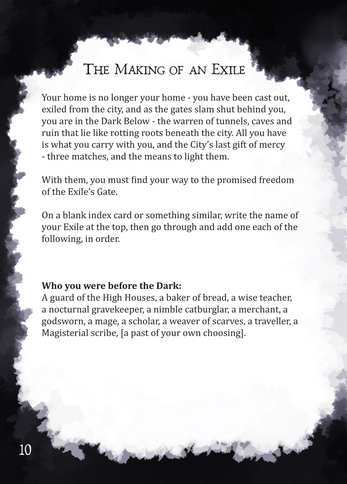 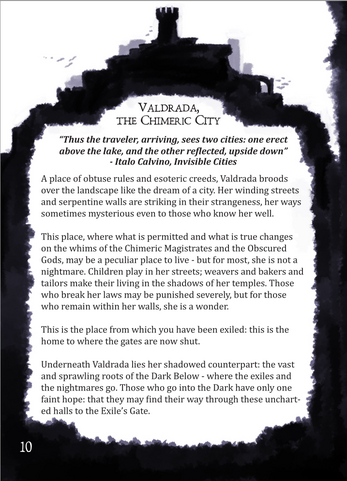 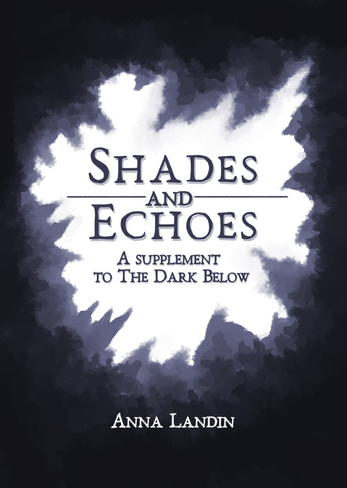 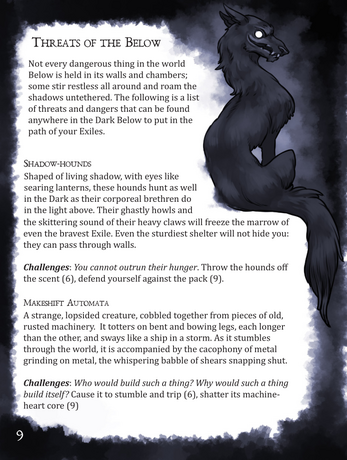